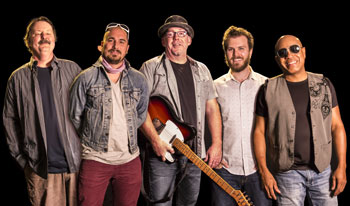 A band founded in 1995 on the premise of "why not, it might just work." The Crawdaddies sound that is unquestionably its own.

The band has been featured in many acclaimed publications, and toured the USA extensively from Maine to Florida to Texas to Nebraska to Chicago earning a strong grass roots following. The band is a regular fixture on the national festival, college, and theater circuits. The Crawdaddies have performed many major festivals including Michael Arnone’s Crawfish Festival, NJ; Ann Arbor, MI Summerfest; Bethlehem Musikfest, PA; Gumbo Ya Ya Festival in Rock Island, Illinois; the DC BBQ Battle; the Virginia Wine Festival; The Barbecue Festival in Lexington, NC and the American Music Festival…plus many more. The Crawdaddies’ exciting performance from the famous WC Handy Blues Festival in Henderson, KY was featured nation wide on the popular PBS music program “Jubilee.” The band has also been selected to showcase mainstage at three NACA (National Association of Campus Activities) regional conferences, the prestigious NACA national convention in Nashville, TN, the PA Fair Convention in 2012, the 2011 MD Fair Convention and the 2013 Millennium Music Conference in PA. In 2006 AOL Citiguide chose The Crawdaddies as “editor’s pick” for best entertainment from Baltimore, MD and the band Received the 2016 Best of Baltimore Award from SOURCE: Baltimore Award Program.

The Crawdaddies’ CDs, Lagniappe, Live from the Road, Keep Lookin’ Up, Accordions Are Cool and Spice it Up have received regular rotation on college radio, internet radio and broad-format “triple A” radio stations world wide and The Crawdaddies start 2017 at #1 on the Reverbnation Regional Blues Charts! The Crawdaddies won the GOLD Starmaker Music Award for song 'The Difference" in February 2014. The band was nominated “Best Roots Rock Band” by the Washington Area Music Association in 2012, 2011 and 2007. The Crawdaddies song "Cuttin' the Body Loose" was a finalist in the 2010 New Orleans Songwriters Festival! The Crawdaddies won three 2009 DC TIVA Peer awards for “Love that Natty Boh” and CD “Keep Lookin’ Up” (Louddust Recordings) was nominated for a 2009 JPF Music Award. Song “Gimme Some” won the “Silver” award in the 2008 Mid-Atlantic Song Contest and in July 2007 "Gimme Some" also landed in the top 20 of the Unisong International Song Contest Category: AAA/Americana. The music video for the song "The Life of Riley" won an award at the 2007 BVA Film Festival and CD "Spice it Up" won awards in two categories at the 2006 JPF Music Awards, Santa Anna, California!

For additional information or to contact The Crawdaddies, call 410-903-8634 or e-mail This email address is being protected from spambots. You need JavaScript enabled to view it..

Where are the Mudbugs?